Preface
This manual is based on the TT-DEC from LDT, Fleischmann turntable 6652 with middle power line for Märklin system and Tams RedBox. As far as possible, I include experiences from other reports, cause they were important.

First to say, there are much better and safer ways to digitalize a turntable. However, not everybody is able or is willing to modify his turntable.

In my case, I will be able to use it everytime with original switch. Second reason is, that my turntable is not to loud.

The TT-DEC is based on the Märklin decoder, but speed and steps can be adjusted.

Changing wires under the bridge can be tried, but this can be more complex as to turn the motor. Some turntables have diodes, capacitors and throttles and some not. No matter - the Fleischmann turntable will work without it. Some older oder long time not used turntables will run better without.

Caution: turning the motor - Some Fleischmann turntables can be very dificult. Small metal plates whicht also are used as connectiors can slip out when the motor cover will be removed. To mount them correct can be very, very tricky! Possible result can be that the throttles begin to glow. So they were waste and the slip-mechanic of the turntable can be damaged irreparable too!

If you don´t want take risk you´ll have to try to correct wrong direction with options - but if it works ….. ? Important factors are: Moving direction of bridge, decoder, Rocrail & during program the tracks and the options in Rocrail.

After that, you have to check if your turntable will move proberly and without any problems in all situations. Mounting the turntable at you railway and that it is mounted itself can cause torsions and deflections. Even small effects can cause that the bridge will not turn proberly. Check it without and with locos. With small and big locos, when locos are centered or at the ends of the bridge.

Backgrund: The TT-DEC send a signal when the choosed track is arrived - but this is no clearly allocation to a track. The TT-DEC counts the steps - therefore the turntable has to turn flawless.

Due to different supported turntables and a lot of pictures in manuals I don´t go into wireing. Important is the jumper setting. This is the first source of error. Is it a Märklin or Fleischmann turntable? 24 tracks or 48 tracks? Also important is that the feedback output is connected and configurated in Rocrail (and other hardware if used).

First I recommend a decoder reset. So malfunctions will be minimized from the beginning. After that, te turntable will turn to every track. When its finished, the TT-DEC is programmed at adress range 15 (adresses 225-240) with all tracks (24 or 48). The TT-DEC only need 1 adress range! It´s a little bit incomprehensible in german manual of the decoder.

You don´t need to configure switches in Rocrail. Control→ Switchcontrol is everything you need. For example enter 53 pro 57 at decoder.

Hint: If both ranges were used you can try another range. Important is, that you use the startadress of a range …11, 12, 13, … 16, 17,… and no decoder startadress wich is between of a range. Otherwise malfunctions can be the result.

After that you can program the reference track as shown in the decoder manual. Then you can choose CLOCKWISE next tracks to programm. The TT-DEC only knew 24 real tracks and the opposite tracks will be reached based on them. It is advised to program not used opposite tracks, too. You´ll have to configure them in Rocrail, cause the Decoder has the opposite turning direction as Rocrail has.

Following manual shows how to programm tracks with the switchcontrol in Rocrail. With kind permission of Rocrail Board Member "psuser1", who designed it basicly for a Märklin TT and allowed to use and modify it for my manual. 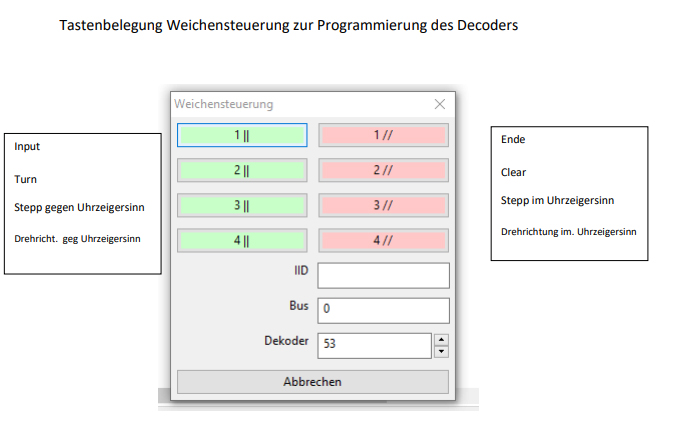 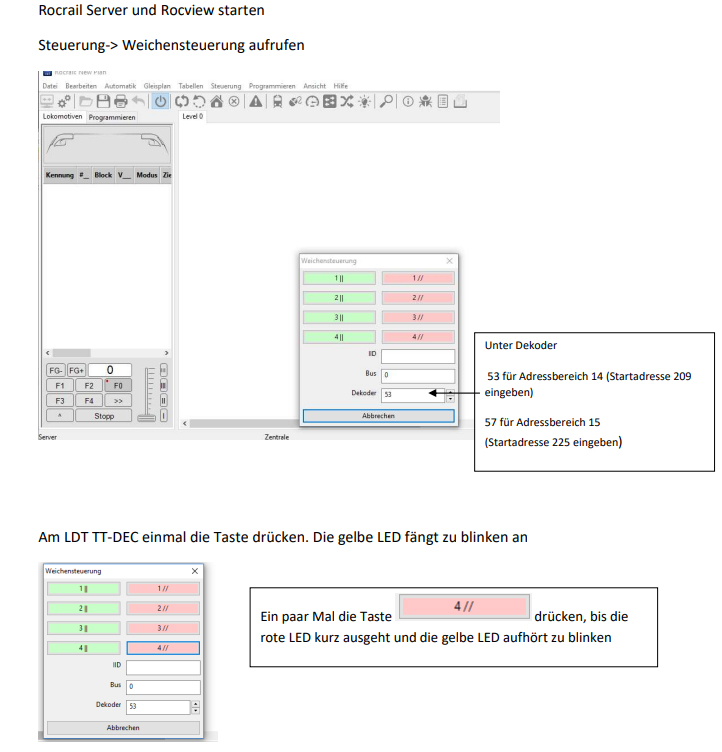 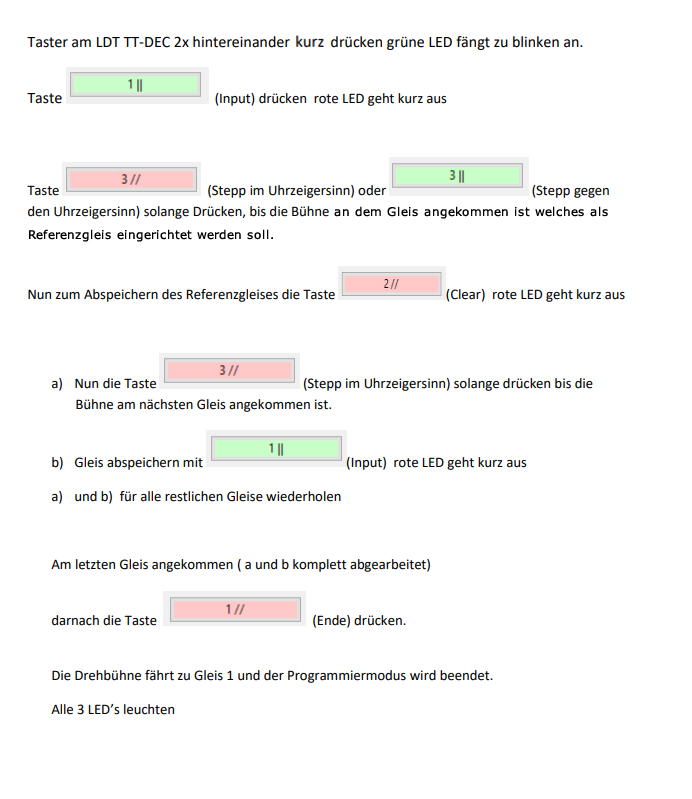 Hint: If you use more than 24 tracks - after you have programmed the 24th track, the bridge turns back to reference track and programming is completed. If it is possible to program more than 24 tracks you´ll have to reset the decoder. This malfunction can cause heavy problems.

Also if you have programed not used opposite tracks it is possible that some seperate tracks or no track can be approached correct. If Setup in Rocrail is correct, you have to program all decoder tracks. If this is done and you configurated all tracks in Rocrail, the "Goto" List can be very long. You can decide whicht tracks should be shown. How to do will follow later under "Tracks".

I only take care of specifc TT-DEC configuration. The extensive possibilities are documented well. 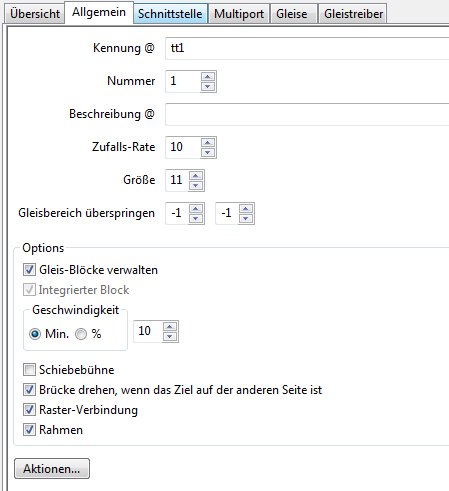 Here should be choosed that the bridge will turn, if target is on other side." 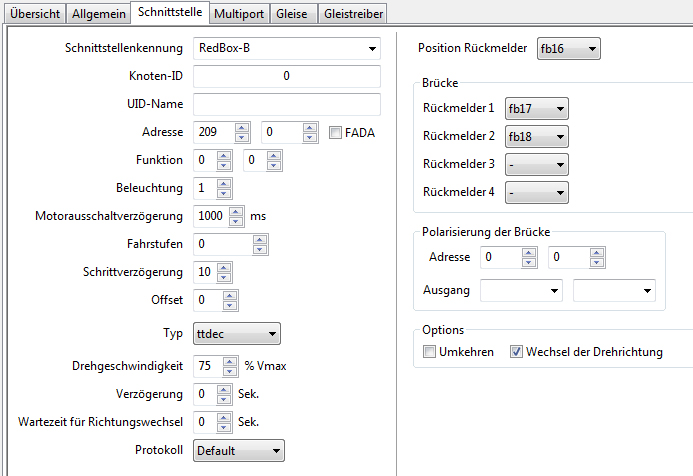 If you have problems, particulary with other similar decoders like the Märklin decoder you can choose Motorola protocol. Decoder type "Digitalbahn" can be tested too in case of problems.

Don´t forget to choose the feedback sensor for the turntable position!

TT-DEC has the opposite turning direction as Rocrail. So you have to enter opposite tracks, too. Following list will show all tracks and theire assignment.

The following picture shows red signed tracks which are not visible, normal displayed tracks and 2 different track menues with the checkbox to configure it. 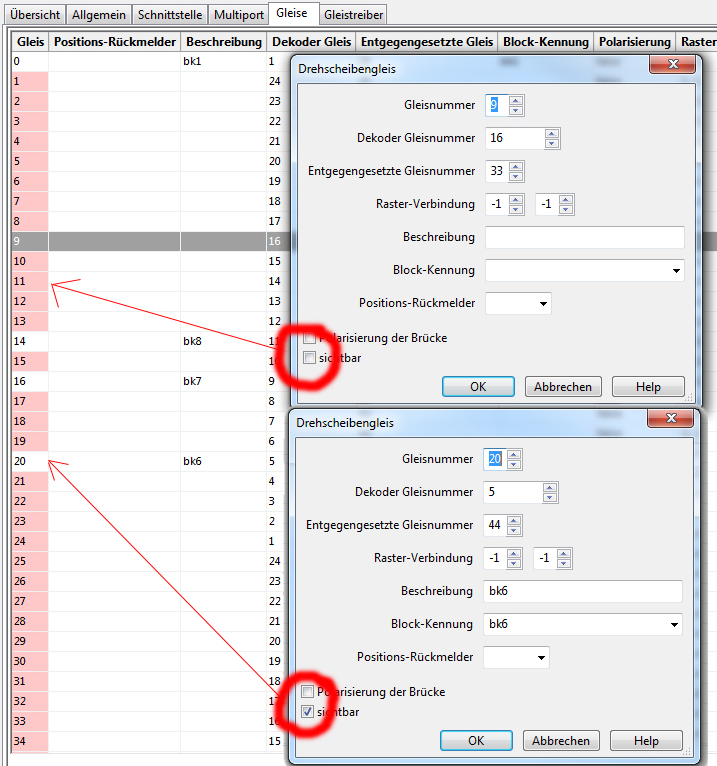 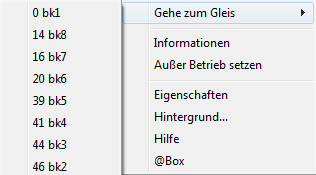 As you can see at GoTo Track" menue, it only contains the visible tracks.
Caution: "next track" and "track before" will turn to invisible tracks too! This ist correct! This make it possible to turn to every programed position. For example to remove the bridge for maintanence work.


Known problems: The bridge stops while turning and will not react to any command. Solution: You´ll have to programm the adress. If this will not work you´ll need to reset the decoder.