Position a turntable in the plan

Optical adjustment of the track exits 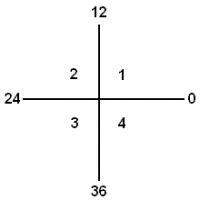 The track numbers are entered in this dialog Turntable: Tracks

Here are the track numbers matching the above picture: 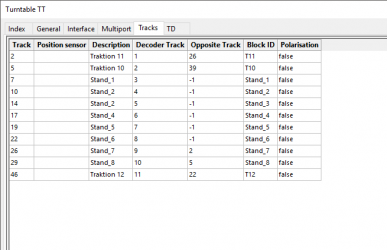 Create all routes around the turntable

The Router does not create routes around the turntable, but there is a convenient function of the turntable object available:

Thus the routes are generated and statically stored in the plan.

Routes can of course also be created manually.

After generating these routes assign the sensors -as usual- in this dialog Block: Routes.

For the integrated bridge block, the sensors are in dialog Turntable: Interface incorporated as sensor 1 - 4.
These sensors must also be created in the Table→Sensors.

Start with Rev 2.1.2418, no actions are required in schedules for the explicit arrival or departure on the Plus or Minus side of the bridge. When entering the turntable as the a destination, it is only necessary to set the options "Arrive side" and "Depart side" required to "Both", "+" or "-" respectively. It is recommended to leave the respective setting on "Both" and only change it in the Special cases described there. The Schedule automatic select and activate a suitable route.

The integrated block of the turntable can also be represented as an external Bridge block if desired.
The setup as an external Bridge block is necessary if, for example, the display of the block status colors, the locomotive/train identifiers or a more flexible assignment of sensors and events is desired than described here: Turntable : Interface. 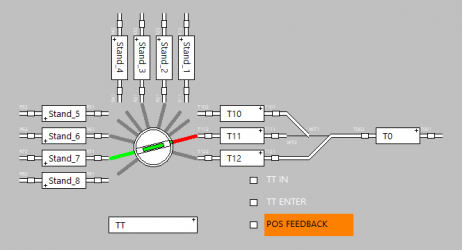 Turntable decoders use one of the following options for the sensors of the turntable position: 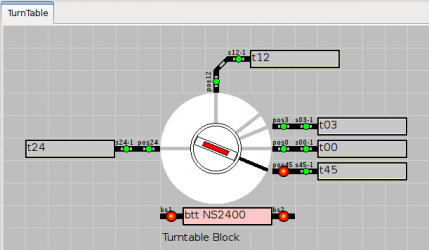 In this example, the bridge position sensors are left visible for clarity.
In the track plan of layouts you can with the option 'Show' set the sensor to invisible.

For best results for positioning the locomotive, it is advisable to interrupt a bridge track and set up two sensors, as shown on the page Turntable.
If mechanical changes to the bridge are to be avoided, the enter2in sensor can be used instead with only one feedback.
It should be noted, that with the individual characteristics of each locomotive, accurate positioning on the bridge is more difficult.

Color representation of the bridge

5) These user pages cover further topics such as

1)
This ensures that the external Bridge block is assigned as the From or To block for the routes generated by the turntable object.
2)
Required for the objects "Turntable" and "External Bridge Block" to be coupled.
3)
Required for the turntable to have an adjusted priority.
4)
The routes were previously (step 4.) stored statically in the plan and saved.
5)
Translation help available in the forum