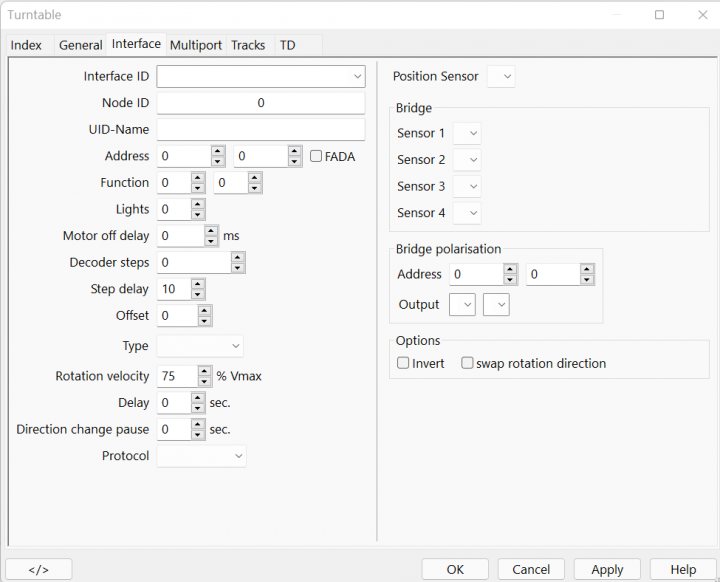 Depending on the type this must be a locdecoder address or a FADA accessory address. – Second address only for decodertype "AccDec".

Depending on the type this is the FADA accessory address for switching the rotation direction.

Forces to use flat addressing.

Specifies the rotation speed of the stage as a percentage of the maximum speed.
This percentage is used to calculate the speed level for the decoder: for example, if the decoder has 28 speed levels and 50% is set, the stage is rotated at speed 14.

Time in seconds to wait, after the bridge got into position, before starting the locomotive.
The sensor event is too early if reed relays are used.

Delay for change of direction

Time in seconds between the direction and position commands.
Only valid for DigitalBahn Decoder; at least 2 seconds are recommended.

This optional sensor can be used if the turntable controller generates an event after reaching the wanted bridge position.
In this case the Track Position Sensors can be left empty.

If the turntable is also to be used in automatic mode, the Bridge track must be divided into at least two occupancy reporting sections. Two Point sensors can also be used, e.g. near the ends of the Bridge track.
See also Bridge occupancy.

The Bridge track can also be divided into three or four sections and the two Middle sections or the punctiform sensors positioned there are assigned to Bridge sensors 3 and 4. The first triggering sensor 3 or 4 generates a pre2in event, which for locs with activated option Stop at pre2in event as in event is evaluated. This allows, for example, shorter locomotives to be stopped closer to the middle of the Bridge track.

The Optional: external Bridge block setup is required in the following cases:

Further details, as well as creating and setting up the external Bridge block, are described in a chapter on the page Turntable: Setup.

Depending on the used hardware one or two addresses or outputs can be used.
Polarisation has to be set for every turntable track; See Track setup.
Not used if left to zero.

Specify the bridge rotation velocity in percents using a locdec type.
This percentage is for calculating the speed steps for the decoder: if the decoder has 28 steps and this value is 50% step 14 will be used.

Time in seconds between direction and position command.
For DigitalBahn decoder only; at least 2 seconds are recommended.

Rocrail calculates the rotation direction to get the shortest way to a track. But if the used decoder seems to do the opposite it can be swapped using this option.

1)
Bridge Solenoid, the solenoid is selected when energized, releasing the track location mechanism so the table can turn. The solenoid is released when the desired track is reached.
2)
Bridge track polarity changeover relay - usually a latching DPDT relay that prevents a track short circuit when a loco enters or leaves the bridge.
turntable-int-en.txt · Last modified: 2022/04/27 00:45 by rainerk