A fast clock for the CANBUS.

Actions added to the turntable object for playing sounds and so on.

If a Schedules is not long enough, just take a Tour. For those lucky guys with hundreds of trains…

The CANBUS DCC Command Station will be available soon. All tests were positive during the las weeks.
The CAN-GC3 makes the CANBUS solution complete. No need to invest in malfunction expensive commercial hardware any more; Time has come to run at CAN speed.
Professional boards & kits are available.

The firmware for the CAN-GC1 and CAN-GC2 has been improved and heavily tested at a maximum CAN through put.
Professional boards & kits are available.

The firmware for the CAN-GC2 is ready including a dedicated setup panel.

Added a loco list with images for selecting in the throttle and block dialog.

Added support for traversers, transfer tables, to the turntable object in andRoc. 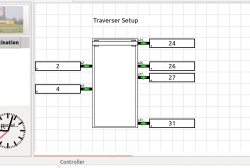 Added support for traversers, transfer tables, to the turntable object. 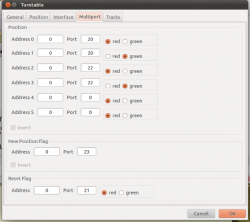 Support for the 'Draai15' (K.Moerman) turntable controller is added.
Testing is not completely finished but experimental using it is encouraged. 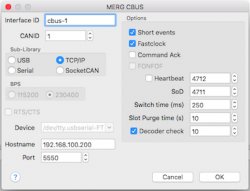 Today the CANCMD, CANBUS Command Station, is supported so running locos is reality.
All needed functionality is tested to get a layout running in automatic mode with Rocrail and CANBUS.

A FLiM node setup dialog is added as a general solution for configuring CANBUS nodes.

The new optional "Control code" can be used to manage client write access.

The setup dialog for CANBUS is added. But… CANBUS support is still WIP! ;)

Support for the CANBUS system is started. Rocrail is now official member of MERG to be able to get test hardware.

Many fixes applied for multi-layer and modular layout view. Also some fixes for zooming issues and throttle speed.

The "Small Throttle" option is added, which is default activated, to make it possible to use the entire screen.

An Emergency Break option is added in the throttle view by pressing th "FG" long.
Also function group 5 is added; F29 and F30 are disabled.

andRoc is trimmed for large display support. The look&feel differs from previous versions:

I proudly announce the official Rocrail Client Service port: 8051. As from now the default is set to this port number if none is specified in the rocrail.ini and rocview.ini.

The two aspect main, the distant and the shunting signal are added to andRoc. 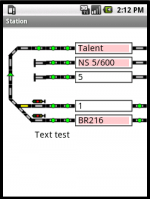 The Text object, for displaying text, is added in andRoc.

A setup dialog is added for configuring the RocNet connection.

Optional wait time in ms between commands as work around for some command stations and decoders not capable to process 2 or more commands within a very short period of time.

The turntable can be scaled from 2 to 5 grid boxes in diameter.The picture shows the a Turntable in size 2 on a Mobil client.

The only thing new about scripting is the fact that it is now documented; Rocrail scripting has been available from the early beginnings of the project.

This optional ID is for trains running always the same schedule and save setting it by hand.

Force setting one route at a time, regarding the synchronizing timeout, to reduce power consumption and switch decoder overload with multiple outputs.

Fixes and improvements by Lothar. A demonstration of this service will be on 14-05-2011 in Speyer.

The new MGV145 stepmotor controller has 6 bits for selecting the track number. The newly added bit is optional to ensure compatibility with existing controllers.

Thanks to the commitment of Fred and son we have now a 100% functional firmware based on UDP-Multicasting. Peter and I have done also some heavy testing and are very pleased with it.

The last used IID and module number is saved in the rocview.ini to recycle in the current and next sessions until it is changed.

This option was already implemented for a few weeks or so, but the Windows implementation did not work. After many tries and errors I found today in Internet a tip which I would never had guessed.
Apparently the linked Windows socket library, wsock32.lib, does not support this option and must be replaced with the ws2_32.lib… Now it works. Please report if any side effect is detected.
→ 06-05-2011: It is tested and reported as OK. Tnx to Fred.

The last used servo setup IID is saved in the rocview.ini to recycle in the current and next sessions until it is changed.

The last used servo setup addresses and ports are saved in the rocview.ini to recycle in the current and next sessions until it is changed.

The DB is extended with missing symbols and got some color update. Tnx to the effort of ChrisB.

The loco throttle dialog is extended with a "FG" button to switch between F1-F12 and F13-F24.

To be able to get informed about a Rocrail server running day in, day out, this SNMP extension can help administrating it.