Up to 128 Channels for servos, signals, semaphores and lighting.

Up to 128 I/O and more possibilities based on Raspberry Pi on RocNet with professional GCA boards and kits.
"An independent and open source solution to control a model railroad."

Automatically adjust the acceleration, CV3, depending on the assigned train.

A simple dialog for testing the (undifined)sensors.

Renaming a Route ID or other object IDs is now "partly" automatically supported by changing also the dependent objects through out the complete layout (data model).

Block Brake Timer for smoothly reduce speed between the enter and the in event. 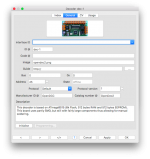 Maintain stationary DCC decoders and use RocPro to program.

Show current, voltage and temperature in a scope like panel. 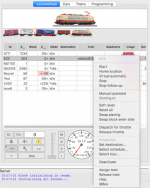 Creating trains on the fly with automatically calculated length for use in blocks and routes.

For fine speed step control a new option has been added to use buttons instead of a slider.

Support for railroad crossings with any number of tracks.